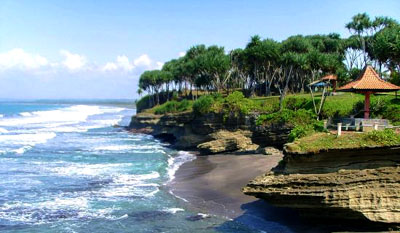 One of the best beaches in Pangandaran Regency is called Batu Hiu. Many tourists recognize it due to its richness of legend. The location is in Ciliang Village and it belongs to Parigi Sub-District. Apart from the legend, people are impressed by the breathtaking panorama of the sea and big waves as well. Unlike other secluded beaches in Pangandaran, Batu Hiu is more suitable for families due to nice facilities and amazing nature. No wonder, spending a day or two in such location would be an amazing experience. Even visiting the beach during working days is a good idea.

The Nuance
Many beautiful features surround the beach. First, it is the formation of waves. They are both strong and majestic! Next, tourists would be impressed by the dark and soft sand of the shoreline. In the back, a small hill resides with its Pandan Wong trees! From the hill, tourists can enjoy better sea scenery as well. In the same location, some gazebos are available for sitting, relaxing, or sightseeing. What is next? It is the best feature which is a big coral reef located about 200 meters from the shoreline. The shape is similar to a shark, which explains why the beach is called Batu Hiu (the Shark Coral).

Exploring Batu Hiu Beach
The beauty of Batu Hiu Beach is one thing. It is because tourists can enjoy other things like a sacred tomb located in the north of the beach. No wonder, many people come to the beach for worshipping or looking for an inspiration as well. Before approaching the tomb, though, visitors should pay attention to their hygiene. They are not allowed to litter, too. Both the hill and tomb are considered holy, after all.

The next charm of Batu Hiu Beach is the legend that surrounds it. According to the locals, a group of Mataram Kingdom’s army visited the beach during the 11 century. The army was led by Nini Gede and Aki Gede, actually. They decided to take a rest on the hill near to the beach before continuing the journey. One of them looked for some foods in the sea and was able to capture a big shark! Though, they decided to release the animal. Magically, it turned into a giant coral which became the prime feature of the beach until now.

Another popular activity to do in Batu Hiu Beach is photography. Too many interesting objects are available to capture, after all. This includes the gate of the beach which represents the shape of a shark’s head. The formation of palms on the hill also becomes a good background for photography! What is more? Later, in the afternoon, tourists are able to capture the sunset.

How to Get There
The distance between Pangandaran City and Parigi Sub-District is 25 km. That means tourists might take about 1 hour to head to the location (through Raya Cijulang Street). Once reaching Parigi, their next destination is Ciliang Village. From there, it only takes several minutes to reach the beach.